Did I just break through a brick wall? Elizabeth Durhead. And things come in twos.

Elizabeth Durhead, my fourth great-grandmother on my maternal grandfather's side, has had me stuck--a "brick wall"--for almost as many years as I've been researching the tree. She married Samuel Carvell on 22nd April, 1776, in Churchover, Warwickshire, one of a group of villages that straddle the Warwickshire/Leicestershire border surrounding the market town of Lutterworth, and in the area where future generations of Carvells will live and work and grow their families. Churchover, Misterton, Kimcote, Walcote, Costerbach... until great-grandad Samuel Henry Carvell settled in the city, Leicester, after retiring from the army.

Elizabeth Durhead and Sam Carvell had at least eleven children, at least five of whom did not survive their first five years, sadly typical of families of that time. Agricultural labourers, poor, with children arriving one after the other until fertility ended, or the mother died, after which the father often remarried, quickly, for help with all the children.

My ancestor Samuel Carvell, son of Elizabeth's Sam, was the second child born to the couple to be named Samuel. There was a Samuel baptized on 25th April 1778, and then "my" great-great-great grandad Samuel who was baptized on 11th May, 1783. Both baptisms in Churchover, both to parents Samuel and Elizabeth Carvell. I cannot find a record of the first Samuel being buried... so either "my" Samuel was baptised twice and he was older than I think he is, or the first Samuel died and was buried elsewhere, or there were two Samuel and Elizabeth Carvell couples living in Churchover at the same time. That's not impossible; there was definitely a family patter of names for all the children, but I tend to believe that the first Samuel child did not survive.

Anyway... back to Elizabeth Durhead.

There is no record of any Elizabeth with the Durhead surname anywhere in the parish records, not in Warwickshire, nor Leicestershire. In fact, there is nobody, man, woman or child, with the surname Durhead, not anywhere I have searched: not in all of England or anywhere in the world of online records and indexes.(That's not to say that they didn't exist.)

I tried saying the name, Durhead, out loud, and writing it in different ways. I tried many variants on the spelling: Durrhead, Derhead, even Daffyd. I studied the photos of the parish register, squinting and trying to see if there was a different way of transcribing it. No... it still looked like Durhead.

There is an Elizabeth Durrad, a variant on the name that I hadn't previously thought of or seen, born in Kimcote in 1754, daughter of Sarah Durrad, a "natural child". That's such a nice way of describing an illegitimate baby whose father's name is not known (or not given). Durrad! Yes it sounds the same as Durhead! The age fits for marrying Samuel. But wait... there is another Elizabeth Durrad, also born in Kimcote, also a natural child, but whose mother's name is Mary Durrad; this Elizabeth was born in 1759.

So now we have two possibilities for a relationship that might be completely incorrect... but for now, I am going to go with Elizabeth the elder, baptized in 1754, as that would make her 22 at the time of her marriage to Samuel Carvell, while the younger Elizabeth would have been only 17. (And of course, there might have been an Elizabeth Durhead of Churchover, meaning that neither of these natural Elizabeths are the right one.

I won't stop looking, yet, but this does feel like a breakthrough! (It will now be interesting to see how quickly this link becomes propagated to other researchers' trees online, because so far everyone else was stuck at the same brick wall.)
at September 22, 2017 No comments: 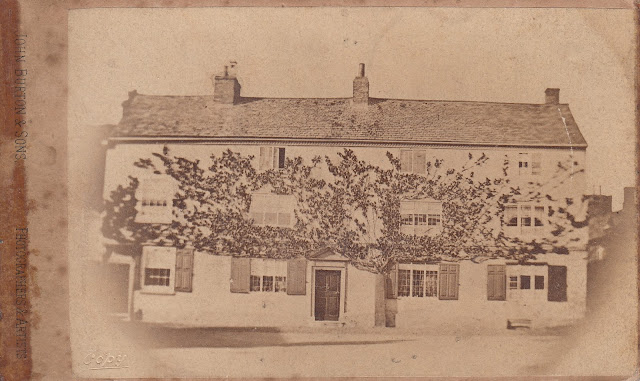 Much thanks to Ray Young, Syston, and the Syston Town History Society for sharing the top photo. It's from a Victorian "carte de visite", and was part of my uncle, George Toon's, collection.
at September 19, 2017 No comments: