More Syston butchers, a load of tripe, and a few gypsy tales (part one)

There are a couple of more unusual family names that wind in-and-out of my paternal tree (in both my grandad Toon's, and my grandma Riley's, lines, so much so that there I have relationships with several ancestors in multiple ways) and I have been exploring them: Possnett and Blankley. Like the Toons, they are sprinkled around the area between Syston, Loughborough and Melton Mowbray, Leicestershire, with occasional forays into other areas, but not a lot of roaming until we find the Blankley that married a Smith, and then they were definitely travelling, in caravans.

In the story about The Butchers of Syston, we met my great-great-great-grandmother, Ann nee Possnett (b. 1778), who married James Toon (b. 1767). Ann Possnett's own great-grandmother was a Blankley: Elizabeth Blankley, baptised in Hoby, Leicestershire, in 1692. (This part of my heritage brought up two lovely names that have faded with time: Leonard (Possnett) and Gabriel (Blankley), names which were used through several generations. Now I have both Gabriel and Emmanuel in my blood. What does that say?) 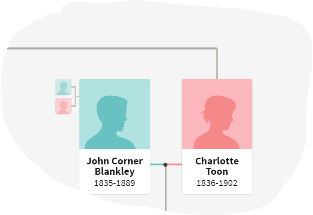 Closer to my generation, and in Syston, Leicestershire, my great-great aunt Charlotte Toon (b. 1836, daughter of Richard Toon and his first wife Catherine Cooper) married John Corner Blankley in Syston on 30th January, 1859. Their son, Frederick Charles Blankley, was born sometime in 1858, before the marriage: there was a bastardy order placed against John Corner Blankley which was then abandoned, presumably because the parents married each other. John Corner Blankley and Charlotte went on to have several more children:  Catherine in 1859, Harry in 1865, Mary in 1866 and Florence Anne in 1872. There are a few gaps: maybe there were more children or pregnancies, not found yet. In 1861 and 1871 the family were lodgers in the home of John Brown, in Syston, but by 1881 they had moved to Tollerton in Nottinghamshire (and John Brown from Syston, their previous landlord, was their visitor in Tollerton - possibly connected to John Corner Blankley's paternal grandmother, who was a Mary Brown, born in Syston in about 1777).

John Corner Blankley's father was Charles Blankley, and guess what. He was a butcher, and he lived in Syston, on High Street. His father - John C's grandad - George Blankley was a butcher, too. I checked the 1841 census again, and realised that I had missed a few in the original story: there were at least three more Syston butchers, two called Sheffield and one called Charles Blankley, in Syston, in 1841. As well as John the eldest child, he and his wife Jane nee Corner had three more sons: William (born 1839) worked on the railway, went to London, and ran a coffee house. Charles (born 1849)  was a 'beast dresser', probably involved in butchery in 1871, but later worked as a labourer. Frederick, born 1853,  was a shoe finisher who was married and living in Leicester by 1861. Daughters Elizabeth (1837), Emma 1838), and Mary Ann (1843) the second - another Mary Ann born 1832 died in infancy) completed the family.

John Corner Blankley was a butcher too, of a special kind: in 1861 and 1871, he was a tripe dresser. The guy who took the first three stomachs of cows, cleaned and scraped and prepared them, and made them fit for humans to eat. While tripe is no longer part of most peoples' diets today, it's not so long ago that people ate it frequently: I remember my own grandad gently simmering honeycomb tripe, in milk, with onions and either nutmeg or mace or cloves; my memory has me scudding through the kitchen, not wanting to see the skin on the milk but fascinated by the shapes in the tripe.

(And this is where we see the interconnections in the tree: while Charlotte Toon was my great-great aunt, John Corner Blankley was also my fourth cousin, four times removed.)

By the time the family were living in Tollerton in Nottinghamshire in 1818, John Corner Blankley had progressed from tripe dresser to cattle dealer. That might have had something to do with his eldest son, Frederick Charles, and the gypsies. More about that in part two of this story!
at January 05, 2019