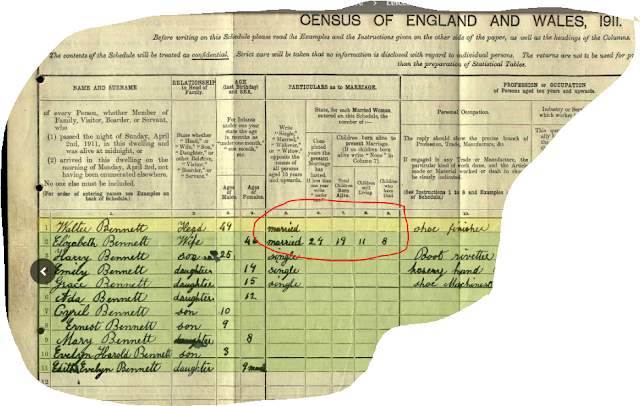 And... that woman deserves a medal! She on lived to the (relatively) good old age of 65. I don't think there were any more children born after Edith Evelyn in 1910, but you never know... Walter, he lived to be 75 years old. I hope all the surviving children looked after them both in their later years.
at August 23, 2018 No comments:

My lost Frosts. They simply melted away... 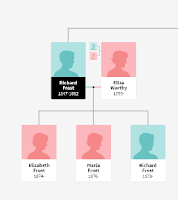 Remember Richard Frost, the (presumably) eldest son, also presumably "natural born" (illegitimate) son of my great-great-grandmother, Sarah Frost?  This is about his family.

Richard Frost was born in 1847 or thereabouts. He married Eliza Worthy (which is sometimes transcribed as Wortley), who was born in about 1850 in either Nottinghamshire or in Shepshed, Leicestershire--she was certainly living with her parents in Shepshed ("Sheepshed") by the night of the census in 1851, aged nine months. (Later censuses say she was born in Nottinghamshire, though the 1851 says Shepshed.)
The married couple were living together with Richard's parents, Emmanuel and Sarah Bonnett (nee Frost), on the night of the 1871 census--by which time the Emmanuel's family was living on Birstall Street, Leicester. I have the impression that the families moved around the area quite a bit... Wharf Street, Birstall Street, later Brunswick Terrace, off Palmerston Street, which no longer exists... Gresham Street, Upper Brunswick Street, all over the area between Belgrave and the city centre that is now mostly vanished (see this story about the demolished 'slums' of Leicester.)

By 1881, Richard and Eliza have three children: two daughters, Elizabeth born in 1874, Maria born  1876, and a son born in 1878, named Richard after his dad. Eliza's parents, William Worthy and his wife Sarah nee Hayes, are living with them in their home at 4 Brunswick Terrace, Palmeston Street: Richard is a shoe finisher, Eliza a milliner--a hat-maker, Eliza's father a framework knitter.

But the very next year, tragedy struck: Richard died, on 7 June 1882, aged only 35. While I am sure that the family had little money, somebody managed to find the pennies needed to put a simple, one-line obituary in the paper. His address is given as Gresham Street... did the family move again so soon? To a better home, just the other side of the Great Northern Station?

I hope they did move to Gresham Street. It has to be said that Brunswick Terrace, off Palmerston Street, was one of the poorest areas of housing in Leicester. Palmerston Street (later called Taylor Street) ran parallel to Syston Street, Birstall Street and Willow Street, but instead of individual terraced houses facing the street, it had "terraces" or courtyards of houses off it, fourteen houses to a terrace, each one tiny. Brunswick Terrace was the closest to the corner of Palmeston Road and Catherine Street, at the point where it changes to Upper Brunswick Street. Gresham Street was a long street of larger terraced houses--a step up from a little house on a terrace.

The closest I have come to finding them is a sighting of an Elizabeth Frost whose birth-date is given as 1875 in the 1891 census, who fits Richard and Eliza's daughter. Listed as born in Leicester, working as a sixteen-year-old servant in Lambeth, London, and employed by a married couple called Nash and their daughter, also Elizabeth, but have no way to verify that this is indeed the very-same Elizabeth... because there is another Elizabeth Frost, born in 1876 with birth registered as Barrow upon Soar, which might have been Belgrave and therefore Leicester from the perspective of a Londoner. But after the 1891 census, I can't find her again either. Nothing.

Logically, Eliza Frost nee Worthy was only 32 when Richard died, and very much young enough to marry again. The children were young enough to be adopted by, or to simply adopt the name of, her new husband. But I have searched everywhere for a marriage record for an Eliza Frost after the death of Richard... and nothing. Eliza isn't short for Elizabeth--she had a younger sister of that name, so her second marriage isn't mixed up in a confusion of firstnames: it would have been recorded as Eliza unless some self-important registrar decided that they knew better than the person who owned the name, but I searched the Elizabeth Frosts too, and all the Eliza and Elizabeth Worthy's too, just in case. Nothing.

I searched for Richard Frost (junior) and Maria. Nothing. I searched all the Richards, no surname, throughout the country... nothing. Censuses, marriages, deaths, everything... nothing.

I did find one Eliza Frost listed as the mother of someone who died in the USA, but that was yet-another Eliza Frost, not our Frost-nee-Worthy Eliza.

Did the whole family die, with nobody left to report the deaths or pay for an obituary? That would be way, way too sad. I prefer to think of Eliza meeting a rich gentleman, setting sail with all the children to Australia, or the USA, or Canada, and marrying her beau on the boat.

I have no idea where any of them went. If you find them, please can you return them to me?