I have been trying, for years, to dig up dirt on the Toons, but they were either too good to be caught (or just too good), or too busy creating, feeding and clothing really huge families, to be seen doing anything naughty. I'll put family size on a back-burner and come back to it later, because there are some prolific dads out there (and some very strong, and then very replaceable, women). 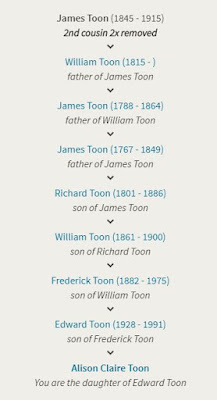 James Toon was born in Syston in 1845, the youngest of a very small Toon family--only one older brother, and two older sisters in the household in 1851! The family lived on Upper Church Street, Syston. By 1861, they had moved to Leicester Road, Syston: both his father and his sister Sarah were framework knitters, his mother a seamer. James, aged 16, was also working the knitting machine. But by 1864, James had been apprenticed to wheelwright Timothy Baum, who was then aged about 28. Our James' parents probably thought the chance for James to learn a trade was something to be celebrated; better than spending hours in the dusty, noisy, framework knitting machine, making stockings and being paid by the piece. No: to be a master wheelwright would be a good thing for James!

To be close to his master, James moved into the home of Baum (or rather, Baum's mother-in-law's home) on the Green, in Syston. The home was shared by Baum, his wife Jane, Timothy and Jane's two daughters, Emma (eleven months) and her older sister, and Jane's mother, Ann Shelton. The youngest daughter, Emma, slept in the room with Timothy and his wife; the older daughter, slept in a bedroom with Mrs Shelton, and James the apprentice had his own room.

On the morning of the 25th November, 1864, James' master had been seen by his doctor, a surgeon, Mr Robinson, who had been treating him for several days. At the trial, Mr Robinson said that he thought Timothy Baum had been suffering from an "inflamation of the covering of the brain", with possibly some "slight effusion". He had prescribed a solution of opium as a sedative (but stated under questioning that it might have acted in the opposite way, with Timothy suffering from "delirium".

Anyway... whatever the cause, whatever the trigger, whatever the motive, or not... during the night of 25th November 1864, probably the most shocking and terrible crime that Syston had ever experiencd took place. Timothy Baum slit his wife's throat as she slept.. and also that of his youngest daughter.

James awoke to the sound of screaming: Mrs Shelton had been awoken by the screams of the baby. James found Mrs Shelton struggling with Timothy at the top of the stairs, the man trying to find his knife, saying he would "do for himself". With the help of next-door neighbour William Adcock (a surnname that you'll hear more of), postman and shopkeeper, and Thomas Toon (another neighbour: I haven't figured out the relationship yet, but there will be one!) they were together able to keep Timothy Baum confined until help arrived.

Witnesses said that the family had been happy. There had been no trouble. Timothy had been sick, weak and depressed; he had been unable to train our apprentice, James Toon, for about 15 days. Mr Robinson, the doctor, said that he looked exhausted and should rest. His mother-in-law, Mrs Shelton, said they were a happy, loving family... but for some reason, the man cracked, in the worst-possible way.

By the time of the trial, Timothy had been examined by the gaol's surgeon, who declared him competent to stand trial. But, on weighing the evidence presented to them, the jury found him not guilty of murder by reason of insanity. He was sent to Broadmoor Criminal Lunatic Asylum, to be detained at Her Majesty's Pleasure. (He was there in 1871, and released on 5th October, 1878. By 1881, he was back in Syston, lodging with a widow and her family, whose surname was Christian, on Barkby Road. They were very brave Christians. He later married the widow and had two more children.) Timothy Baum died in Loughborough, 11th May 1909.

The murders happened in 1864; by 1871, James Toon the apprentice was living in Aston, Warwickshire, and working as a wheelwright. He married Louisa Crofts, also from Syston, in the church of St James the Less, Ashted in Warwickshire, on 19th March 1871. Doubting that he randomly found a Syston girl in Warwickshire, my assumption is that they moved away together... far away from the terrible scene that he had witnessed that night.

James continued to work as a wheelwright, and by 1891 he was working for the railways, as a wagon builder. In true Toon fashion, he'd already produced at least five children with Louisa (who passed away in 1882), and then started another family with second wife Sarah Ann nee Robotham, born 1861. In total: at least 12 children. (I still think my great-great-granddad Richard will win the Most-Toon's competition.)

James never returned to live in Syston. He and his family lived in Aston Warwickshire, Ibstock and Markfield in Leicestershire, Derby in Derbyshire, and once more in Aston, until his life ended in July, 1915 at the age of seventy.

I wonder how many times, over those years, he woke up in the middle of the night, thinking he heard screams? No matter how far you move, the memories stay with you... they just fade over time.

You can find writeups of both the crime story, and the court investigation/trial in newspapers including the Leicester Chronicle and the Leicester Journal for November and December 1864. There's also a short account here in Google Books, in an excerpt from a book called, Grim Almanac of Leicestershire, by Nicola Sly.
at July 21, 2017