I was just looking at the website for California Capital Airshow, which happens here in Sacramento, September 9th and 10th, planning a visit for this year (last year's was fun), which then made me think about Spitfires and their unique sound, and then somehow thoughts went to boats, and a picture that I'd asked permission to reproduce here on this page... and then to the reason why I wanted permission to use the picture. Which was to tell this story.

I lived for several years on New York's Long Island, on the south shore, in a little place called Mastic Beach, Suffolk County. With one or another of my kids, we often made road trips to explore the island; up to the end (Montauk), to the tip of the north fork, to the Sound, to haunted houses and pumpkin farms and to the beautiful beaches. Many times we stopped to explore the cemeteries. We visited the military cemetery at Calverton, with its rows and rows of white stones, but never visited the Long Island National Cemetery in Farmingdale, NY. If I had known that a cousin Toon was there, albeit 3rd and once removed, I'd have been there in a moment.

Maurice Joseph Toon, born on 28th February, 1896, in Philadelphia, PA USA, died on 28th March, 1955, and was buried in the military cemetery in Farmingdale on March 31st. If you are ever there, please stop by plot 5842 and thank him for his service. He was in the USA military during the first world war, serving from July 1918 until September, 1919. He and his wife, Marjorie nee Carman, were living in Oceanside, NY at the time of Maurice's death; not far from the ocean beaches, and close to Maurice's place of work in Baldwin. I'll come back to that. There are no coincidences.

How did a Toon end up on the city end of Long Island, New York? It's a long way from Syston, Leicestershire... but that's where the story begins.

Alfred Toon, born early 1832, in Syston, Leicester, was my first cousin, three times removed. He was the brother of Frederick Toon (born 1830), whose story is here. son of William Toon (born 1803) and of Ann Toon nee Hartopp (born 1805), and also a nephew of Elizabeth Toon.

In March, 1951, Alfred was nineteen, living at home in Bath Street, Syston, with his widowed mother and brothers Marshall, Frederick and David, his sister Selina, and a "nursling"--a foster sister--Emily Goode, four years old. Alfred and David were framesmiths, working on the knitting frames. Older brother Frederick was a framework knitter; Marshall, a needle maker, no doubt the needles used in the knitting frames. Their mother Ann, according to the 1851 census, was a "mender of socks" (as well as mother and foster-mother and housekeeper and everything else she had to do). So Alfred had experience of various parts of hosiery manufacture at an early age. But at the beginning of August, just five months later, Alfred was in Liverpool--boarding a boat for the Americas!

This is the boat. It's the old packet ship, Tonawanda (the one on the right). It would have taken about six weeks to cross the Atlantic, with good weather; longer if the weather wasn't helping. This picture was painted in watercolour by David Johnson Kennedy (1816-1898), and is shared here with kind permission of the Historical Society of Pennsylvania.

The Tonawanda sailed from Liverpool to Pennsylvania, USA, arriving on 18th September, 1851. Alfred was passenger 7 of 549, which seems like a lot of passengers (the Historical Society of Pennsylvania notes that the Tonawanda carried cargo, and about 200 passengers, when it was painted). 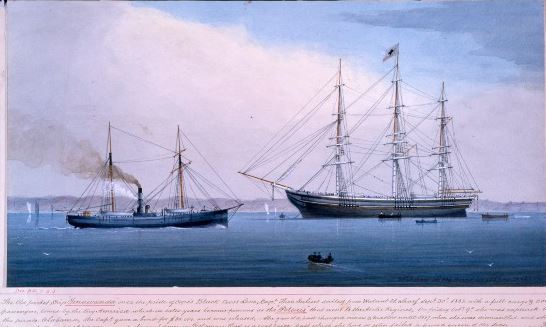 Crossing the ocean on the Tonawanda in his 20th year. That's a brave young man. What made him get up and go? Was it the first time he saw the sea? Passenger 8 on the passenger list is a William Hartopp, aged 31... was he Alfred's uncle? I don't know... more digging to do.