Willey, later William, Toon and Annie Cook were married in 1882, with first son Frederick, my grandad Toon, arriving shortly afterwards. Then, all the others: Alice Annie in 1883, Tom in 1884, Joseph Horace in 1886, Maggie, also in 1886, Walter in 1889, Mary in 1891, Lucy in 1893, Bertha in 1895, Olive in 1896, Alfred Walker (who the family called "Walker", carrying on the family name of his grandmother, Mary Walker) in 1898, and Albert, the youngest and final child, in 1900. Tom died in infancy; Bertha, when less than a year old. The other ten all lived to be adults, several to a good old age, including my grandad Fred Toon (1882-1975). By 1891, the family were living in a house on Chapel Street in Syston, I believe at the High Street end, close to the Wesleyan Methodist chapel building, as great-grandmother Annie was the caretaker of the chapel building later in her life. Living in William Toon's home on the evening of 5th April, 1891, were Willam, a painter by trade, his wife Annie and her sister Lizzie--a cap maker, together with William and Annie's children Fred, Annie, Horace, Maggie and Walter, a niece of Annie's aged one, also called Annie Cook... and baby Mary, William and Annie's latest daughter, who was just three days old! (And which was probably the reason for Lizzie Cook's visit, to help look after the family when the baby arrived.)

Here is the whole family, a few years later: 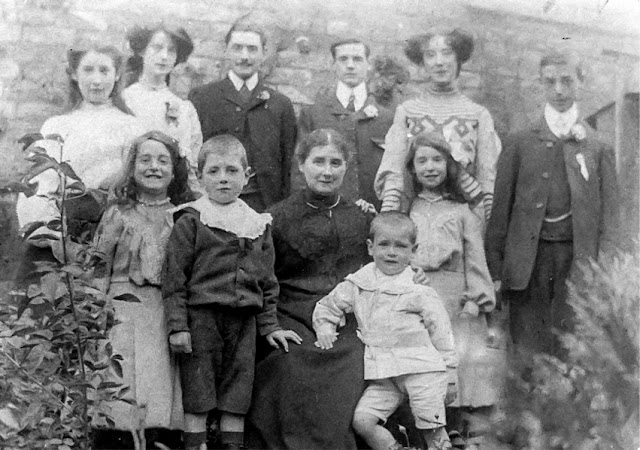 That's Annie Toon nee Cook seated at the front, Fred the eldest at the back with the moustache. I think the back row is Mary, Maggie, Fred, Horace, Alice, Walter and at the front, Olive, Alfred, great-grandmother Annie, Albert and Lucy. Though I might have mixed up Olive and Lucy, and possibly Maggie and Alice. The photo was taken on the day of Frederick's wedding to Sarah Elizabeth Riley of Queniborough, Leicestershire, on 6th June, 1907.

I first saw this photo several years back, shared by one of the Toon cousins but I had no clue who everyone was... recently another cousin shared it again and told me, that's Annie and all her children! Thank you!

(And again... I have no clue who took this photo. If you have any info regarding ownership of the copyright, please let me know so that I can attribute it and beg forgiveness.)

William, Fred's father, Annie's husband? He is not in the picture. He's not in the picture, because he died on 27th January, 1900, aged 39, leaving Annie a thirty-eight-year-old widow with ten children to raise, not one of whom was of full age, and a Painter and Decorator's business to run.

In the 1901 census, great-grandmother Annie is listed as a Painter of Houses; son Fred, aged 19, is a "worker". Alice is 18 and a waitress in a cafe; Horace is an apprentice tailor. Maggie, aged 14, is an upholsterer's apprentice. They were not just working to make money; every one of them was learning a trade. The other children, aged 12, 8, 5, 2 and just one year old, were all either at school, or at home. I think we are safe in assuming that Annie Toon nee Cook had a lot on her plate. And yet... look at the photo above. A few years later, and all the children are growing up healthy and well cared-for, with natural, happy faces for this photo. I think she did a very, very good job.

But what happened to great-grandad William, to cause him to die so young? That's where the poison comes in. Wait for the next part of the story to find out more!

If you haven't read the other parts of this story, begin here at Part One and continue here at Part Two.
at November 19, 2017