Joseph John (Henry) Carvell. And a confusion of names for his lady, Sarah Jane 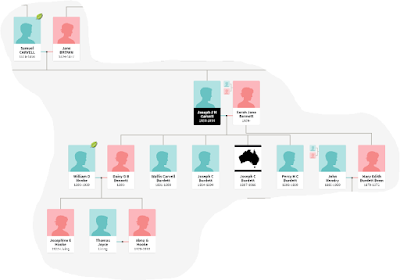 Joseph John (Henry) Carvell was my great-great uncle, older brother by a few years of great-grandad Samuel Henry Carvell. The (Henry) in his name is because on one documented occasion, and one only--the baptism of four of his children, all on one day--his name was recorded as John Henry. At all other times he was Joseph John, or simply Joseph. To avoid confusion with another brother, Henry, I will stick to Joseph John.

Joseph John Carvell was born in Walcote, Leicestershire, to parents Samuel Carvell (1816-1898) and Jane nee Brown (1824-1877), within Misterton parish in the rural west of the county, on 6th September, 1863. He was baptised there, privately, two weeks later, on 21st September. A private baptism might indicate that little Joseph John was sick, though the register says that it was the rector, and not a local nurse or midwife, who officiated. (Baptisms could be done by anyone and then later 'brought into the church', but this appears to have been a church baptism, just private.) If it was because Joseph John was sick, he happily survived.

Joseph John's father, Samuel Carvell, was an agricultural labourer, as were many people living in the village of Walcote at that time. By 1871, when Joseph John is seventeen years old, he is working as a footman, and as little brother great-grandad Samuel Henry Carvell is already working, aged 12, as a farmer's boy, it's likely that Joseph John has been working for several years already.

Then in 1881, while Samuel Henry is a soldier in the 6th Regiment and barracked at the Tower of London, Joseph John has travelled to Stoke Prior in Worcestershire, where he is working as a butler for the Mays family at Tan House Farm. At some point between April 1881 and about 1888, Joseph John returns to Leicestershire, becomes a gardener, and meets up with Sarah Jane... and that is where all the name confusion begins.

Sarah Jane first appears in the censuses as Sarah Jane Bennett, a two-year-old boarder in the home of William Hyde. The family consists of William aged 45, Sarah Hyde his wife, aged 35, William's sons James aged 13 and Tom aged 10, plus little Sarah Jane Bennett and an older Jane Bennett, aged 15, also a 'boarder'. The census doesn't indicate if Jane and Sarah Jane are sisters, but I think Jane is far too young to be Sarah Jane's mother. I can find no indication that the two Bennett girls are William Hyde's step-daughters... there is no Hyde-Bennett marriage to be found. Nor is little Sarah Jane's mother's name easy to identify: there is a Sarah Jane born to an Elizabeth Bennett, no father named, in January 1859, but no way to be 100% certain it's the 'right' Sarah Jane... nor why she and Jane Bennett are living with the Hydes. Sarah Jane Bennett--still called Bennett--is still living with the Hydes, on Benford Street in Leicester, in 1871. Aged 12, she is already working as a "fancy hand"--probably doing delicate hand-work in Leicester's hosiery industry.

In the summer of 1879, Sarah Jane gives birth to a baby girl, Mary Edith Bennett. No father named. (I'll have more to say about Mary Edith later... there is a whole set of stories there!)

But by the time that Sarah Jane marries a William Burdett on 7th March, 1881, she is using the name, Sarah Jane Hyde. Did William adopt her? Or was it simply easier to say to the vicar or parish clerk that Mr. Hyde was her father? It took a while for me to track down that marriage, even though I knew that at some point between the 1871 census, and the 1891 census when she is living in Evington, Leicester, and Joseph John Carvell is her "boarder", her name had changed to Burdett!

In the 1891 census, Sarah Jane Burdett, still a "fancy" workier, now with two daughters, Mary Edith (now listed as Mary Edith Burdett), and Daisy Georgina Burdett (born 12 October 1890, and what a lovely name!) are living at 29 Leicester Street in Evington. Joseph John Carvell is their lodger, and he is working as a gardener. There is no sign of William Burdett, though the census says that Sarah Jane is a married woman--and that Joseph John is single.

I can find no record of William Burdett's death, and nothing at all to say that Sarah Jane is a widow. There is no newspaper story of anything untoward happening to Mr. Burdett, such as imprisonment or disappearance or such: nothing. Just one news item, saying that a William Burdett of 16 Christow Street was fined 2 s. 6 d. for not sending his children to school regularly, dated 18 April, 1889, in the Leicester Daily Mercury... but no way of knowing if it is indeed regarding Sarah Jane's children, or even the same William Burdett. I suspect that the couple simply split up and carried on their lives as if the other no longer existed. (If you know anything to the contrary, please let me know!)

During the 1890's, and by the time of the 1901 census--when Sarah Jane's surname has become Carvell--there are more children born: Wallis Carvell Burdett (1891-1899), two Joseph Carvell Burdetts, the first of whom was born and died in 1894, the second who was born in 1897, and Percy Henry Carvell Burdett, born in 1898, died in 1899. All of these children's births are registered with Carvell as a middle name, Burdett as their surnames, indicating that the parents probably were not legally married. Wallis, the older Joseph, Percy and Daisy Georgina were all baptised on the same day, 4th December, 1898, in Belgrave, Leicester. The family were living at 90 Checketts Road: the road still exists, but that house does not. What prompted the mass baptism? Did William Burdett pass away, allowing Sarah Jane and Joseph John to do as they pleased? Or were the children sick--note that Percy Henry and Wallace would be dead within a year--leading the parents to want them to be baptised before meeting their God? I haven't a clue.

By the day of the 1911 census, the family is living in Anstey, Leicestershire: Joseph John is still a (domestic) gardener, Sarah Jane (simply 'Jane' on the census document) is still a Carvil (sp.) and still Joseph's wife; daughter Daisy Georgina and son Joseph are the only surviving children, both of whom are already working in the shoe trade, even Joseph junior, aged 14. Mary Edith married John Hendry in 1900 and has her own family to take care of. The census says that John Joseph and Sarah Jane have been married for 23 years, so since about 1888, but that was contradicted earlier by the 1891 census, which shows Joseph John as being single, albeit living in the same house as Sarah Jane Burdett. Most likely, 1888 is when their relationship began. The 1911 census also shows that there were five children born to the marriage, and only two surviving, which matches up with the loss of Wallace, Percy Henry and the younger Joseph... but doesn't take into account that Daisy Josephine might be from Sarah Jane's marriage to William Burdett. Intriguing...

Joseph Carvell the younger serves in the First World War as a lorry (truck) driver, and then in 1925, he emigrated to Australia, where he lived until his death, in Victoria, in 1966. Daisy Georgina... Burdett or Carvell? She married a William D Hooke in 1924 in Belgrave, Leicester, and had at least two daughters of her own, Josephine and Alma Georgina.

As for Joseph John, and Sarah Jane Bennett-Hyde-Burdett-Carvell, I think they lived happily ever after... because I haven't yet tracked down when they passed away!

I can see where I get my gardening genes from... several Carvell ancestors found their vocations as gardeners!